Broken Lightner presented some of the biggest challenges the Museum faces on a regular basis.  Two of these challenges are maintaining the collection and the integrity of the building that was once the Alcazar Hotel.

The tour focused on pieces of the Lightner’s collection in need of repair, as well as the architecture of the former Alcazar Hotel Casino.  Barry Myers has worked at the Lightner for over 25 years and inherited the collection in a very disorganized state.
By discussing past restorations throughout the tour, guests were able to see where the Museum intends to grow in the future.
The tour began in the main lobby, which was restored in 2000.  The Lightner’s lobby is now an elegant first impression of the Museum, but it was much less awe-inspiring prior to the restoration.

The luxurious marble floors are a replica of the original encaustic Hotel Alcazar floors. The replication of the floors was made possible by the J.W. Tiberio Family. With the immense natural light coming through the windows, the marble brings a certain luster to the space that the encaustic tile would not have been able to provide.
Prior to the restoration led by Museum Director Robert Harper, the space went through multiple structural transformations.  During the 1970’s the wings of the lobby were closed off and were used for city offices including a police station, but during the restoration those walls were torn down.

The ceiling needed a significant amount of plaster work due to the installation of a sprinkler system, plumbing, and a drop ceiling.  The chandeliers were made possible by donations of private donors, as well as a matching grant from the Department of State. The front lobby is now as radiant as ever.  Most visitors however, are completely unaware of the condition it was once in and the money, time, and planning that goes into such an extensive project. 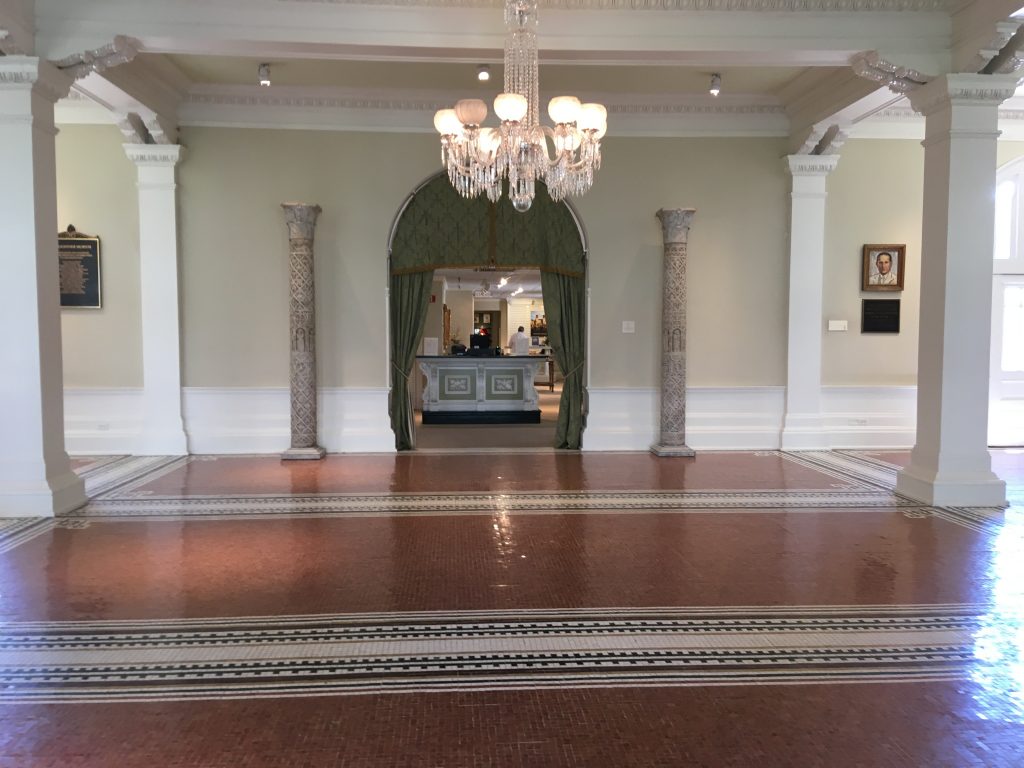 Visitors on the tour were also introduced to a porcelain figurine that was recently restored through the Lightner Museum’s Adopt an Artifact program.  Adopt an Artifact allows someone to contribute directly toward the restoration of an item in need.

Made by Amphora Porcelain Works in Teplitz, Austria, Camel and Rider dates to circa 1900 and is part of Otto Lightner’s original collection.  The ceramic piece was restored in time to use as  part of the Downton Abbey™ Exhibition, and will remain on display.  The Lightner is proud to display Camel and Rider, as it was adopted by the children of a former, long-time volunteer of the Museum.

You can find more information about this porcelain figurine here!

One piece of the collection currently in need of adoption is Winged Mercury.  Winged Mercury, circa 1890 has been in storage for over four decades. The base no longer uplifts Mercury, and the finish has been harmed by the weather.

Director, Robert Harper envisions Winged Mercury in its former glory, adorning one of the fountains in the Museum’s garden courtyards.

To see Mercury in all its glory click here!

Thankfully, the Lightner has photographed all of its restorations allowing the museum to be clear about where we have been, where we are, and where we want to be.  In the following weeks and months we will be sharing these photos as part of a series.

The collection is now the most organized it has ever been, and the Lightner Museum wants to take the opportunity to share its future goals of improving the historic building and collection!

The Museum will soon be listing some new items available for adoption, and will be announcing what areas the Lightner is hoping to have restored, so stay tuned for more information!

The Lightner Museum is a non-profit cultural institution sustained by the generous support of individuals, businesses, and sponsors.