One of the greatest additions to Otto Lightner’s “collection of collections” is the building housing the museum he founded. In 1947, Lightner acquired the former Hotel Alcazar in St. Augustine, Florida. Closed since 1931, the building had fallen far from its heyday as a luxury Gilded Age resort hotel.

Completed in 1888, the Alcazar was the second grand hotel in St. Augustine built by railroad magnate Henry Flagler. Three years earlier, Flagler had purchased his first parcel of land for development, setting in motion a plan to remake the Ancient City as a luxury winter resort for wealthy East Coast tourists. Flagler engaged the fledgling firm of Carrère and Hastings to help realize this vision. John Merven Carrère and Thomas Hastings had both studied at the prestigious École des Beaux-Arts in Paris, beginning their architectural careers informed by the newest ideas from Europe. They worked briefly for the noted New York firm of McKim, Mead & White until their professional association began in 1885 with the commission for Flagler’s Ponce de Leon Hotel in St. Augustine. 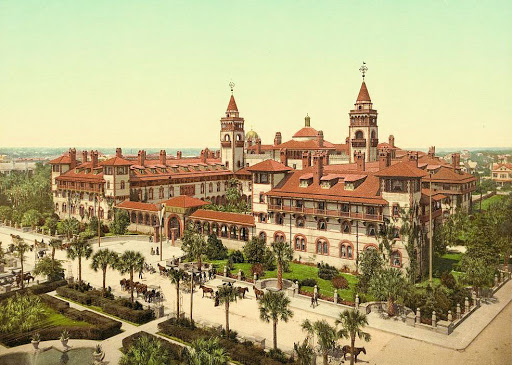 The Alcazar was initially conceived as an entertainment annex for the Ponce de Leon, but the design was soon revised and expanded to create an independent hotel. Work began on the new building in 1887, when the Ponce de Leon was substantially complete. Evocative of St. Augustine’s past as a Spanish settlement, and typical of the eclecticism of the era, Carrère and Hastings drew inspiration from Spanish architecture, enriching the building with elements of Italian Renaissance and Moorish design. A similar architectural vocabulary was employed by the architects at the Ponce de Leon Hotel, which had opened to great acclaim on January 10, 1888.

The Hotel Alcazar is a monolithic structure of poured concrete. Flagler’s St. Augustine hotels were the first large multistory concrete buildings in the United States. The hotel’s Spanish name is derived from an Arabic term meaning “castle,” and the imposing gray exterior looms fortress-like over a formal landscaped plaza separating the Alcazar from the Ponce de Leon Hotel. The façade is enlivened with intricate terracotta detailing, and crowned with roofs of red tile. The mass of the façade is punctuated at regular intervals by large arched windows at street level and smaller rectangular windows above. Twin towers draw the eye skyward, up and away from the grey mass of concrete. The towers are crowned with elaborate belvederes of terra-cotta and red brick. On each façade, the classically-influenced design features pairs of Corinthian and Ionic columns. The Italian Renaissance motifs are further enhanced by putti supporting wreaths. 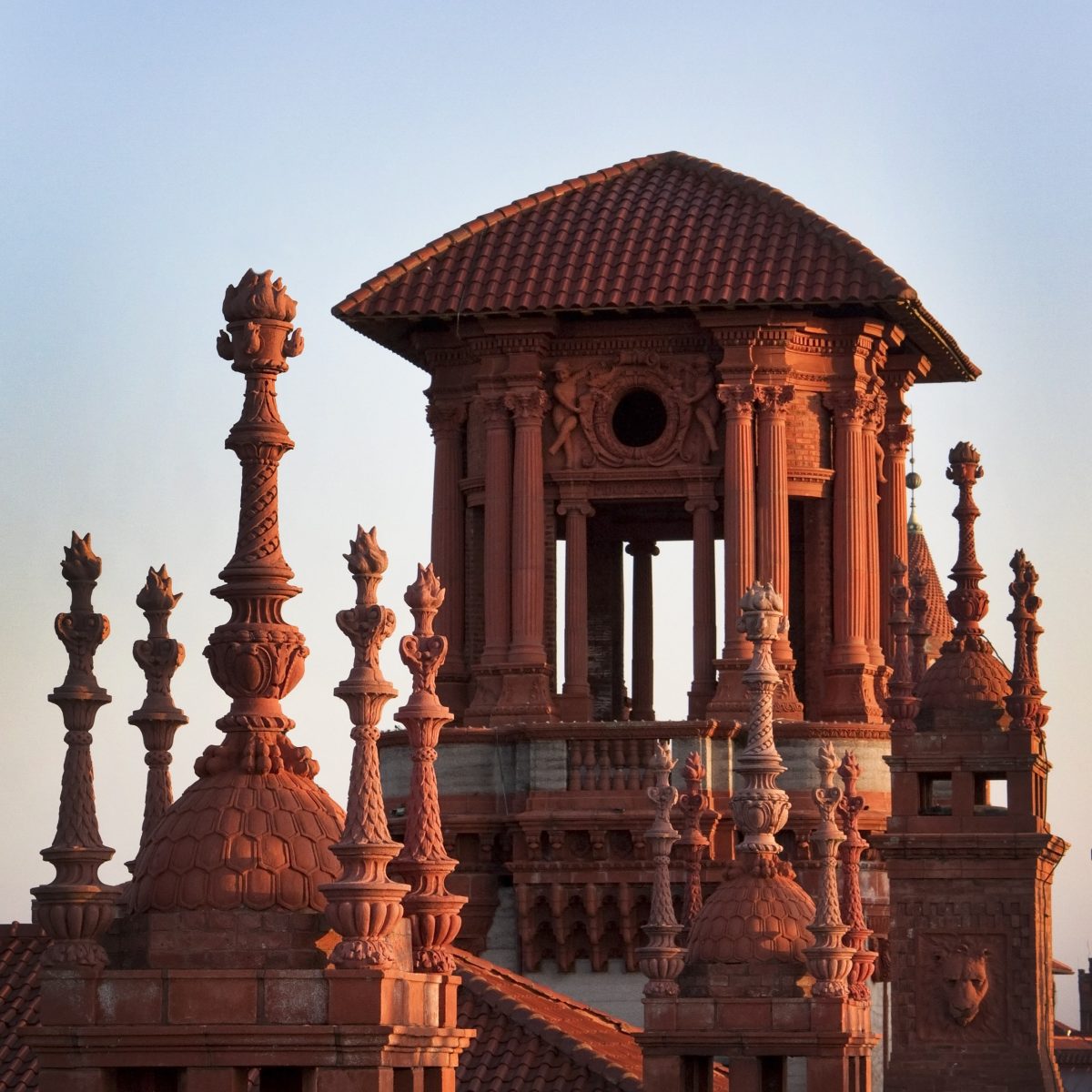 Elaborate terra-cotta ornament enlivens the exterior of the Alcazar. 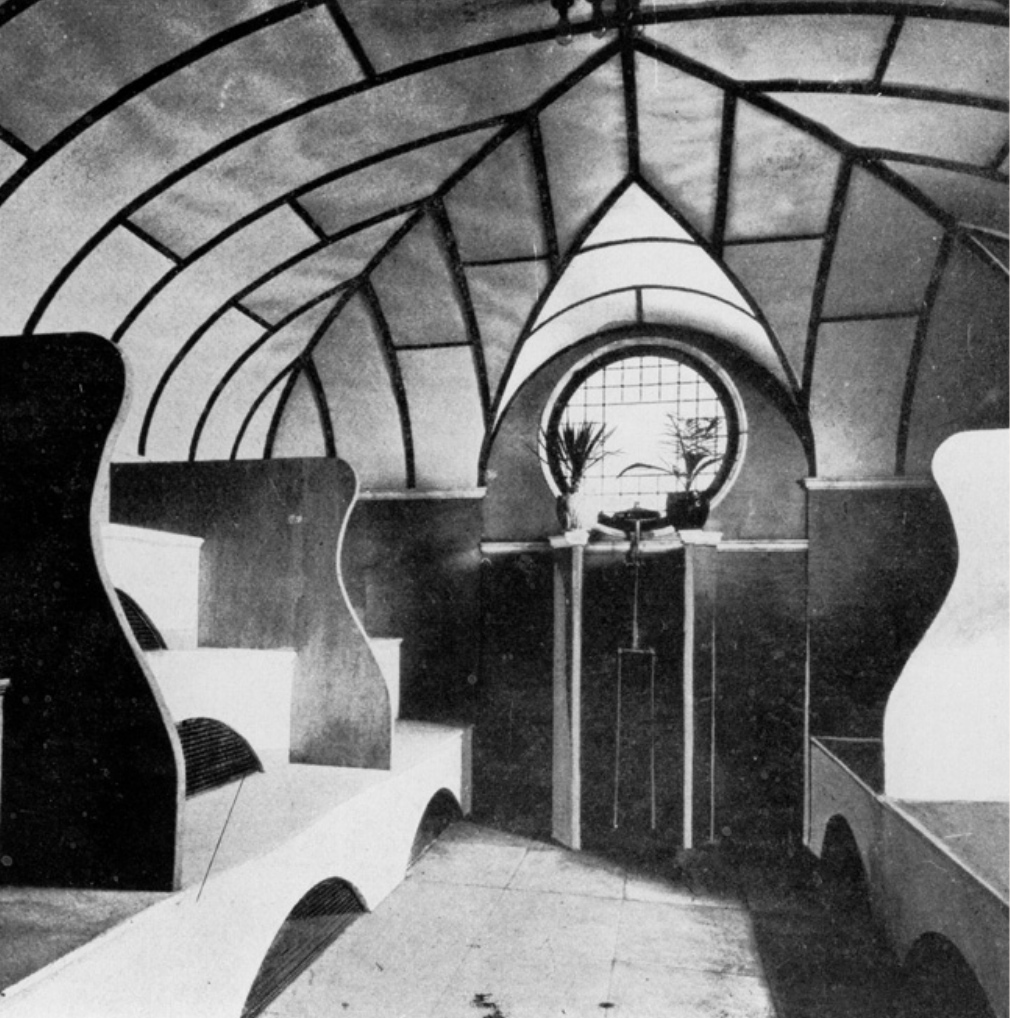 The Russian Baths at the Alcazar.

The plan of the Alcazar comprised three distinct units, the hotel, the baths, and the casino. The hotel portion at the front of the complex framed a lush landscaped courtyard lined with shops selling all manner of goods from evening gowns to oriental rugs. What distinguished the Alcazar from the grander Ponce de Leon Hotel was its indoor entertainment and recreational facilities, which proved popular with guests and locals alike. The baths, occupying the central section of the building, included Turkish (dry heat) and Russian (steam) baths, a cold plunge pool, massage rooms, and a gymnasium. The hotel promoted the health benefits of its facilities as a remedy for all manner of ailments including, “gout, rheumatism, liver and kidney diseases, neurasthenia and obesity.” At the rear of the complex was the grand casino, a substantial four-story structure housing the world’s largest public indoor swimming pool at the time, an archery range and bowling alley and, on its third floor, a stately ballroom. The Alcazar’s recreational facilities extended beyond the building, with tennis courts and a croquet lawn to the south.

On its exterior, the casino was a massive symmetrical block, resembling an Italian palazzo. It was approached from street level by a twin staircase, leading to a grand terrace. At the heart of the casino was the swimming pool. Measuring 120 feet long by 50 feet wide, the pool was supplied with water by an artesian well.  An arcade encircling the pool provided access to dressing rooms for bathers, while a series of dramatic concrete arches extended the full height of the casino, from the bottom of the pool to the ballroom above. The soaring interior was crowned with a skylight illuminating the space with natural light.

At the height of its popularity during the 1890s, thousands of guests passed through the doors of the Alcazar. Each winter season the hotel was alive with grand parties, charity balls, cakewalks, and local celebrations. As the 20th century wore on, changing tastes and increased options for vacationing meant that Flagler’s St. Augustine hotels witnessed an ongoing decline in visitation. Following the Wall Street Crash of 1929, and the ensuing Depression, the Alcazar closed its doors in 1931. 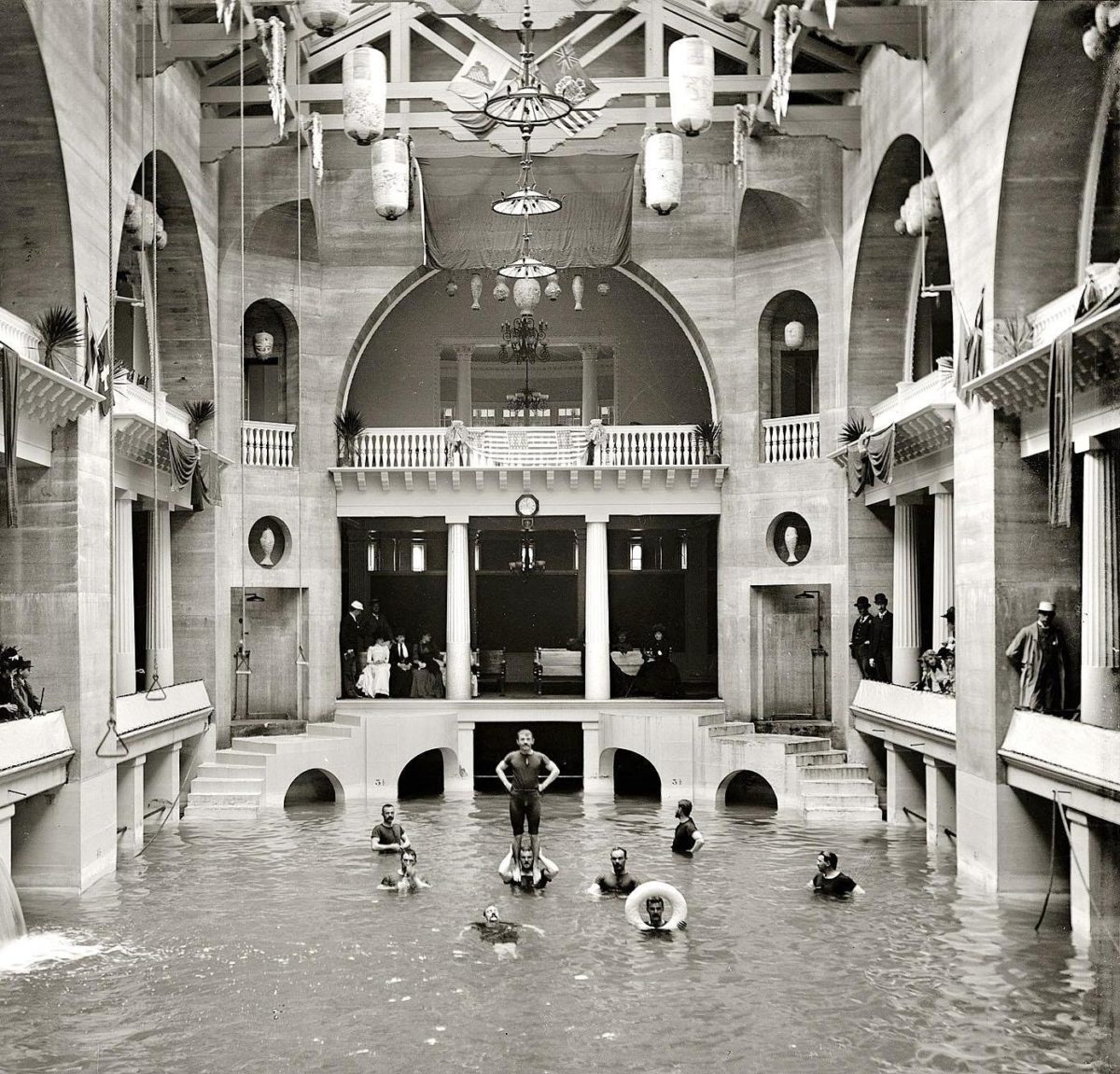 The historic swimming pool at the Alcazar, 1889.

Purchased in 1947 by Otto Lightner, the Alcazar was transformed into a museum to house Lightner’s substantial collection of fine and decorative art, ephemera, and Americana. Today, as the Lightner Museum, the former Alcazar Hotel is a vibrant cultural destination welcoming visitors from all over the world. The museum celebrates the remarkable history of the hotel and its place in Henry Flagler’s powerful vision to shape the future of Florida at the dawn of the 20thcentury.