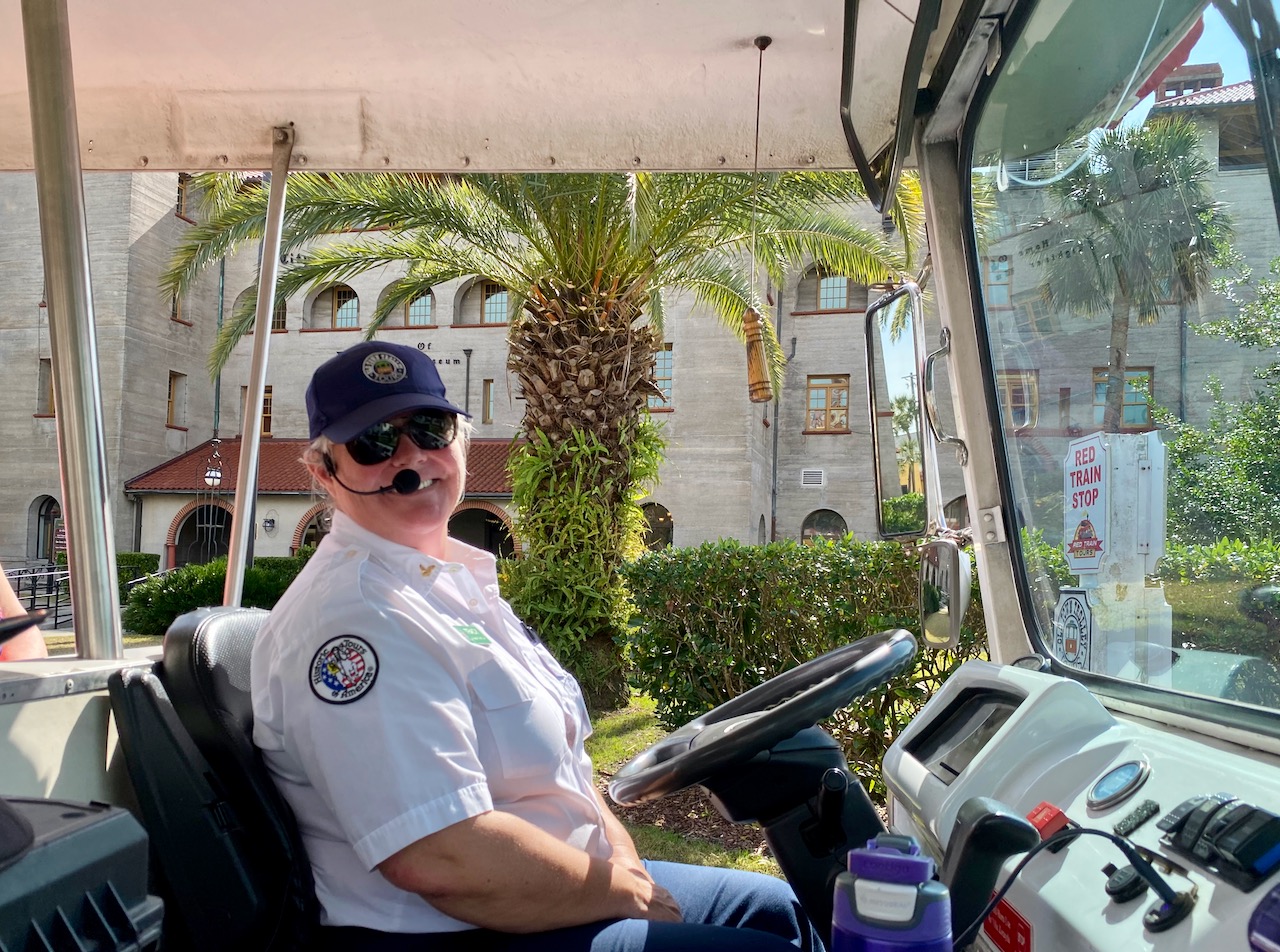 The Old Town Trolley is a must-do for any visitor in St. Augustine. Zipping around the ancient city in covered, comfortable trolley cars, you will always find drivers who will impress you with their vast amount knowledge of the city’s rich history – while entertaining you with their wit. Our driver today, Tracy, didn’t miss a beat.

Here’s what you need to know. Once you purchase your ticket, make sure you don’t lose your sticker. There are 23 stops, and you can hop on and off anytime, which you’ll want to do often. Stop 1 offers three intriguing attractions: the Authentic Old Jail, the Oldest Store, and the St. Augustine History Museum. After all that, you may be ready to sit for a while – but don’t linger too long. Almost every stop cries out for a visit. A few highlights:

When you pass the Castillo de San Marcos fort and are about to turn towards Potter’s Wax Museum, you pass Huguenot cemetery. It’s quite crowded, and some graves have up to 25 bodies buried on top of one another!

Once downtown, there are endless places to visit: the Oldest Schoolhouse (where you can wonder if you would’ve been a dunce head), the architecturally scrumptious streets, and the first-rate Columbia Restaurant, which opened in 1905 in Tampa and is still run by the same family today, and much more. If you’re lucky enough to have more time in this city, you can easily devote another full day to walking around downtown and venturing into the different shops, galleries, and eateries.

Be sure not to miss the exquisite Lightner Museum near the Casa Monica Hotel. The museum is housed in the former Alcazar Hotel, which was built by railroad tycoon Henry Flagler and later transformed by publisher Otto Lightner into a Museum of Hobbies. Take about an hour to visit the museum so that you can walk inside what was once the largest indoor swimming pool in the world, sit in the former Russian Baths, get eye-to-eye with Winston Churchill’s pet lion, Rota, take in some tunes played by 100+ year old instruments, enjoy the beauty of American cut glass, and meander in the former ballroom.

Opposite the Lightner, you can visit Flagler College’s stunning campus. The main building was once another Flagler-owned hotel called the Ponce De Leon. It holds over 70 Tiffany stained glass windows, valued at over $130 million. Take the short campus tours that allows you to view those treasures.

Heading back on the trolley, there are several churches glittering with gorgeous décor on the outskirts of downtown. Flagler built the Memorial Presbyterian Church in honor of his deceased daughter and granddaughter, and he was subsequently buried there as well.

There is much more to do. Just past the Lightner Museum, you can get off the stop in the Lincolnville section of town, which is full of dramatic stories from the civil rights era, including Martin Luther King’s famous visit. You can hop off later to pop into Villa Zorayda to see a 2400 year old rug from the Egyptian pyramids. One another stop, sample the delicious food and drink at the Ice Plant. The original ice making plant, coupled with Flagler’s famous railroad, made St. Augustine into a shrimping capital. One of the former railroad buildings is now the San Sebastian Winery.

The Oldest House is another hop off must-do. Later, while passing the Bridge of Lions, flanked by Firm & Faithful, you can grab the free beach shuttle to take you across to the stunning, white-sand beaches. If that’s not your thing, head back to where the trolley started. Along the final stops, pay homage to the “Old Senator,” a 600-year-old live oak tree which is also a “love tree” since a palm tree grows out of it. Then duck under the breathtaking Spanish Moss on Magnolia Street, and grab a sip of water at the Fountain of Youth. You’ll need it by then.

And guess what? If you take the trolley the next day as some visitors do, you’ll realize how much you missed on the first go-around!